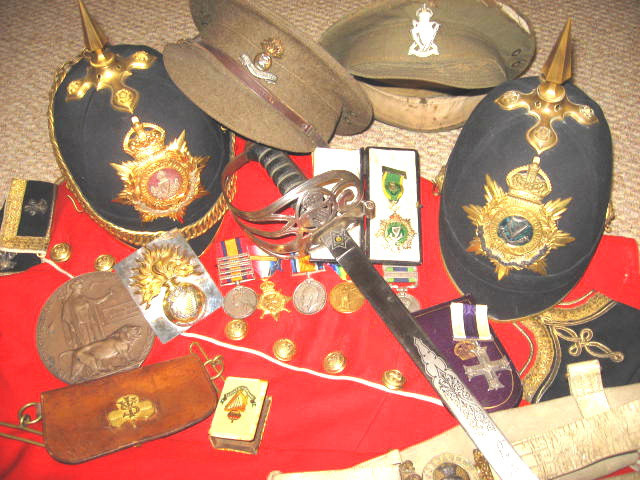 The Irish items on offer include medals, badges and militaria relating to the disbanded Irish Regiments of the British army including the Royal Dublin Fusiliers, Royal Munster Fusiliers, the Leinster Regiment, 18th Royal Irish Regiment, Connaught Rangers and South Irish Horse. I also include items to the Royal Irish and Ulster Rifles, Royal Irish Fusiliers, Inniskillings etc. While the pre 1922 selections have a strong military emphasis I also offer police items relating to the DMP, RIC etc. As a collector in the field since the 1970’s I also wish to purchase single items or entire collections. A selection of material relating to the 1916 Rising and Irish War of Independence including medals, badges, documents as well as post 1922 selections of collectables relating to the Irish Defense Forces is also available.

The website will be updated on a regular basis, so please check it regularly. If you want additional information on any item or if you wish to sell or part exchange some of your surplus items please email me.

All items are photographed and described as accurately as possible. I specialize only in original, authentic items and do not sell reproductions, re-strikes or copies. As such you can be assured that any item sold here is genuine. If you are unhappy with your purchase(s) please return in the same condition as when received for a refund or credit towards the purchase of any other item available for sale.

Payment can be made by Pay Pal, cheque, bank draft or credit transfer.

As a collector I am keen to purchase single items or collections.

My passion is the collection of pre 1923 Irish historical militaria. I am keen to collect and purchase single items or collections. I am particularly anxious to acquire items relating to the RIC, DMP, Disbanded Irish Regiments of the British army, 1916 – 1923 Irish War of Independence related items and early Irish Free State army and emergency period memorabilia. From time to time I sell, swap or trade my surplus items. You can check out my website Irish Historical Militaria.com for further information. I am also involved with the Medal Society of Ireland, you can check out this society at msoi.eu.

I’ve been a collector of Irish militaria and police items since the 1970’s when my Mother got me interested in antiques. Travelling to antique auctions in Co. Tipperary with her, I soon became attracted to anything military, especially swords; from time to time, I persuaded her to buy memorabilia for me.

My family is a typical tapestry of various shades of Irish historical life. Growing up in Clonmel, a garrison town before 1922 for the 18th Royal Irish, I heard many tales of the Great War, the RIC, the War of Independence and Civil War. My Dad served in Fianna Eireann circa 1920, and later as an assistant platoon leader in the LDF during the emergency (1939 to 1946). My uncle Paddy was a civil war journalist, and served in the British army in Normandy during WW2. Other family members served in the RIC, 3rd. Tipp Brigade Old IRA, Tipperary Artillery, London Metropolitan Police, and the RAF. My great-grand father was a fulltime Staff Sergeant in the British army, while his son was a passionate local founder of the Gaelic League.

My military experiences began in the FCA, moving from 3rd. Motor Squadron Cavalry Corps to the 11th Cavalry, with a final short stint in the Slua Muiri. I’m a secondary teacher by profession – history of course being one of my areas! I work as a careers guidance counsellor and assistant principal in Dublin.